Police around the UK are warning users of electronic cigarettes that they need to be mindful of their vision when they vape and drive or they could risk points on their license or worse. According to the police, if you are using e-liquid devices while driving and your vision is obscured by a cloud of vape smoke, you could run into legal problems.

Not Illegal To Vape And Drive

There’s nothing against the law about using an e-cigarette while you are driving but the problem comes when the device causes a distraction, in which case it is treated the same as other handheld devices. If the police decide that motorists are distracted by them or that the clouds of vapour produced mean they can’t see the road properly, then they run the risk of a charge of driving without due care and attention.

And that can be a serious charge – with between 3 and 9 points on the license, it can come with a fine of up to £2500 and even a disqualification period.

As more people than ever use wholesale e-liquids in their electronic cigarettes to stop smoking, the warning is a stark one. Many people will vape while driving just as they had once smoked while driving.  But if the police decide you are distracted, then the law comes into force.

Distraction isn’t just about smoking or vaping. You can run into trouble with this law if you are eating while driving.  And we are all aware of the laws around using a mobile phone while driving with its increased penalties. But anything that increases the potential for a crash can be deemed as a liability and the police can get involved.

Visual impairment is something many drivers take steps to avoid – using sunglasses or a visor on a sunny day, ensuring the windscreen is clear in the snow. But things inside the car can also count as visual impairment and the vapour from an electronic cigarette is a new example of this.

The Most Dangerous Thing We do

According to road safety charity Brake, driving is the most dangerous thing we do on a daily basis – it is a complex task that needs all of the driver’s attention to reduce the risks involved. That’s why they are advocating that drivers don’t vape while they are driving. They believe it increases the risk of a crash, causes visual disruption and also is a distraction.

With roads being busier than ever, they are in the camp that firmly believe vaping is best done before or after the journey and that drivers should have their concentration completely on the road during the journey.

The police have advised that if you are vaping while driving, it is best to do so with the windows open and ensure you blow vapour out of the gap. Make certain you have full control of the vehicle while doing this and you reduce the risk of running into legal problems – or another car – due to the vapour produced.

Vaping e-liquids has become a vital way for many people to stop smoking traditional tobacco... 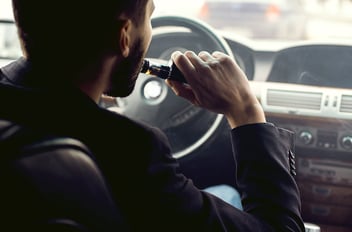 Police around the UK are warning users of electronic cigarettes that they need to be mindful of... 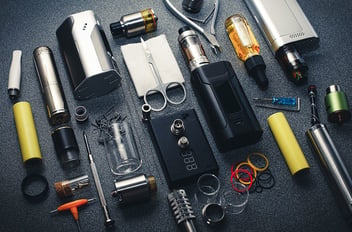