The State of Vaping: The Latest Figures

As an e-liquid wholesale company, we are always interested to know what the latest trends and news from the industry is. Electronic cigarettes are now available around the world and more people than ever turn to vape to stop smoking than ever. But what are the other big stories for the vape industry?

Vaping Is More Popular Than Ever

Vaping is more popular than ever – because there are figures to prove it. According to the latest statistics from the World Health Organisation (WHO), there has been a small but steady decrease in the number of smokers worldwide in the last 18 years. At the same time, the number of vapers has risen rapidly from around 7 million in 2011 to 35 million in 2016. By 2021, the figure is expected to reach 55 million.

It’s no surprise in light of the first stat that the amount of spending on e-cigarettes is also increasing. According to the stats, the global market is worth around $22 billion – increasing from just $4 billion five years ago. The top three markets for vaping is the US, Japan and here in the UK with the three countries spending a combined $16 million on smokeless tobacco and vaping in 2016. Other European countries are joining in too with Sweden, Italy, Norway and Germany also in the top 10.

There are two main systems for e-cigarettes known as an open tank and closed tank. In the open tank system, the user can manually refill the tank and the unit has a removable mouthpiece. Closed systems use ready-made refills that simply screw into the battery of the e-cigarette. In terms of global spending, the open systems are coming out the top and the gap is widening. The closed system in 2017 is estimated at around $4 billion while open systems were worth around $8 billion.

If you are considering starting a brick and mortar store to sell e-cigarettes and e-liquids, then research shows this could be a good move. A report from Ernst & Young shows that most users buy their devices in specialist shops. In 2015, over one-third of users surveyed across the UK, France, Germany, Poland, Italy, Russia and South Korea used a shop to buy their e-cigarette. The 3,000 person study also found that 21% of people bought online. It seems many will buy their first products in a shop then use online stores for top-ups. They like to get advice when it comes to buying the devices but will use online options for liquids.

The final question was around why people vape and over half of people in the study said that it was because vaping is less harmful than regular cigarettes. Another popular reason (49%) for it was that it helped cut down on smoking while some 45% of people also said that it was because it didn’t bother other people. 41% said that there were more places that allowed vaping than smoking and a similar figure cited the range of different flavours available as a reason for vaping. 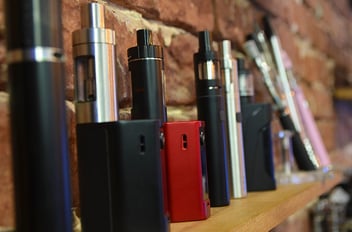 As more people than ever use electronic cigarettes as a way to stop smoking, more companies than...